It’s quite astounding to think that BMW’s golden goose of a motorbike—the GS—has been around for more than 40 years. The GS single-handedly saved BMW’s motorcycling arm from extinction when it debuted in 1980, forming a new adventure segment that, today, is among the hottest tickets in the industry.

However, why the GS is so successful doesn’t really have to do with any one aspect of riding. It’s the fact the GS and its beefier, bigger-tanked GS Adventure brother are perfectly at home in all situations, from commuting to carving canyons to exploring off-piste deep in the desert. Such versatility is a trick so very hard to pull off in modern motorcycling. However, that doesn’t mean that BMW is resting on its well-earned laurels. At the end of 2018, BMW unleashed the R 1250 GS Adventure, a new edition sporting the Bavarian giant’s ShiftCam technology for the horizontally opposed boxer motor. 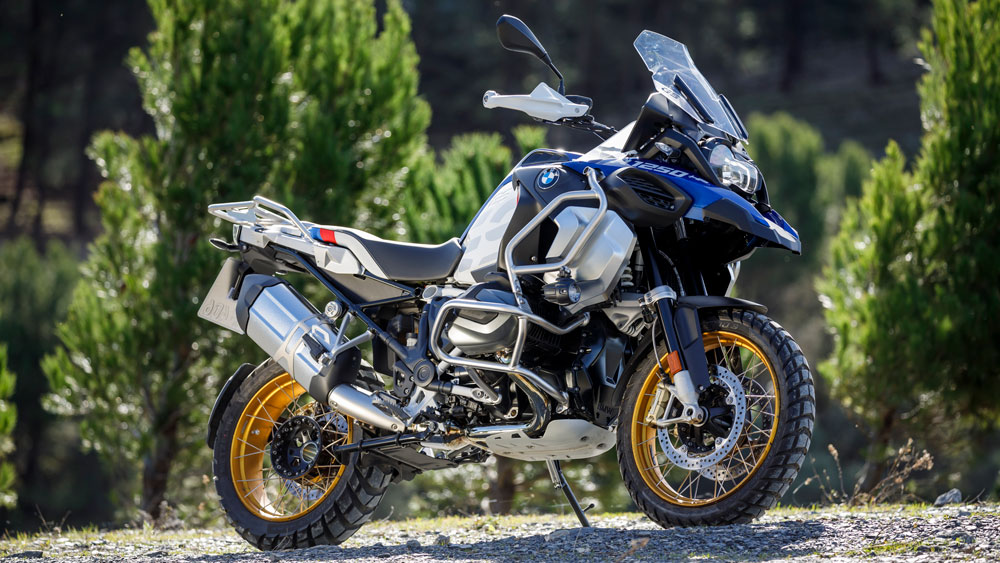 ShiftCam is BMW’s version of variable valve timing. Using a shift gate on the end of the camshaft, the intake valves are opened at different times in the combustion cycle when on partial throttle at lower revs, resulting in less valve lift but better control of the combustion.

When you open it up to full throttle, the shift gate moves the cam onto a different lobe that allows for the full lift and duration of the valves to be reached. The result is more air, more fuel and more power.

There’s a definite boost, as the revs surge past 6,500 rpm on the ShiftCam GS Adventure, which is now more powerful and explosive than ever. But with the ShiftCam, you also get exceptionally smooth fueling at low revs, making the $20,195 GS Adventure an absolute delight on the trail and in traffic. 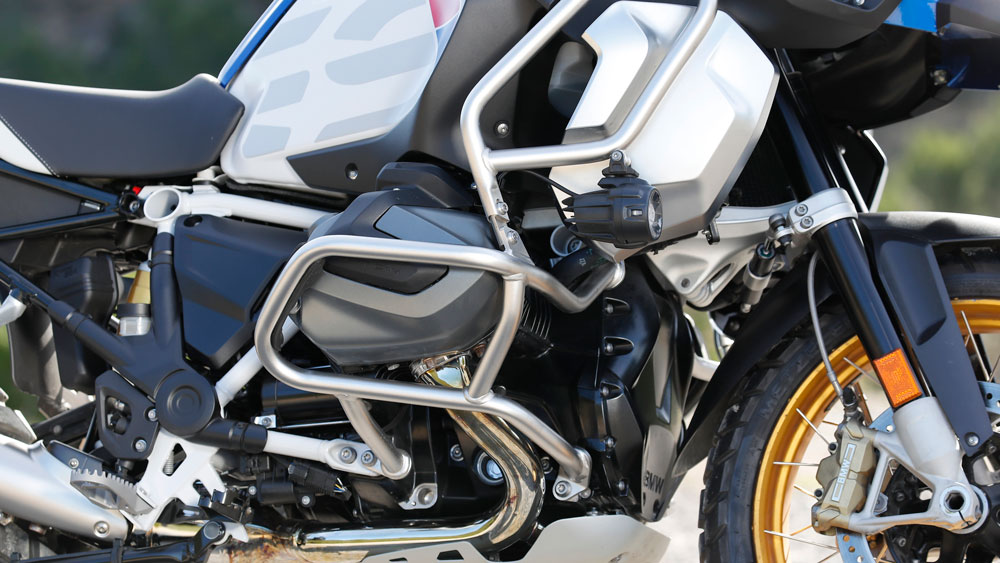 The 136 hp, 1,254 cc motor may be sublime in such circumstances, but the fact remains that the GS Adventure is a very big motorcycle, one which requires poise and concentration to ride correctly, especially on off-road terrain. Weighing 591 pounds with a full 7.9-gallon tank of gas, it’s right at the top of the big-bore adventure bike category. Be that as it may, the GS Adventure is loaded with electronic extras (some would say too many), as BMW attempts to keep you safe from yourself.

Standard fitment on the GS Adventure includes twin riding modes, Automatic Stability Control (basic traction control), cruise control and Hill Hold Control to name just a few. The latter a handy feature that holds the motorcycle on the brakes until you let the clutch out on a steep incline. 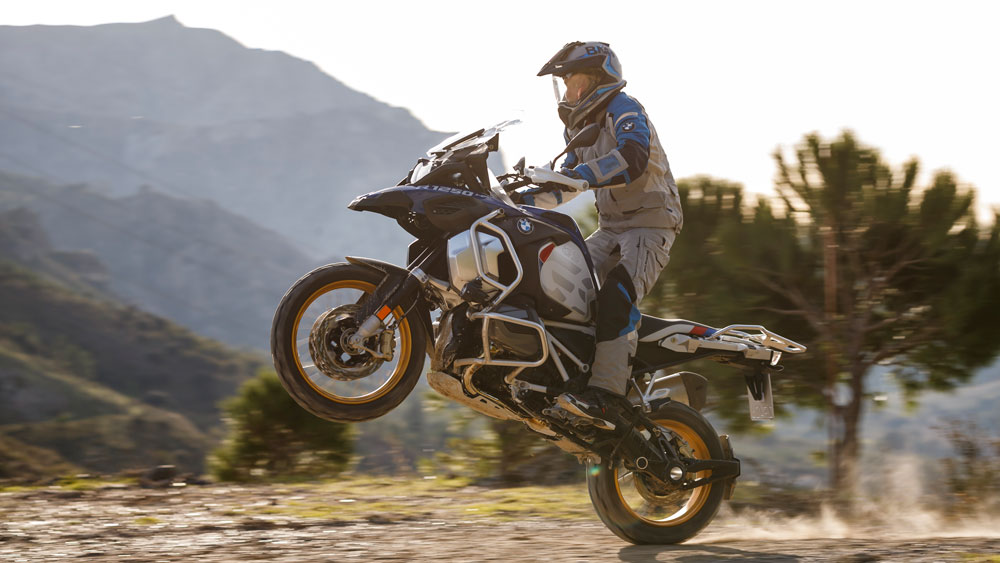 The GS Adventure is a very big motorcycle, one which requires poise and concentration to ride correctly.  Photo by Joerg Kuenstle, courtesy of BMW Motorrad.

This wouldn’t be a BMW bike, however, without the copious options available to you as an after-sale purchase. These, which our test-bike was fitted with, include the excellent Ride Modes Pro feature, housing Dynamic Traction Control and Dynamic ESA (Electronic Suspension Adjustment). In addition, there’s the new Dynamic Brake Assistant feature that reduces the motor’s torque delivery and adds a little rear brake in an emergency situation. In other words, when the front brake lever is applied and you accidentally roll back on the throttle (it happens), you get braking and all available engine brake, but no unwanted acceleration.

I personally believe that the GS Adventure is at its maximum in terms of electronic gizmos the engineers can integrate. It can be thoroughly overwhelming to go through and understand each mode via the 6.5-inch TFT dash, and the GS now lacks the simplistic nature that made it so good in the first place.

That’s not entirely a bad thing, it’s just the price of progress, for the GS Adventure is still the best do-it-all machine you can buy. Once you take your mind away from all the electronics, the ride—both on and off road—is brilliant and annoyingly hard to criticize. 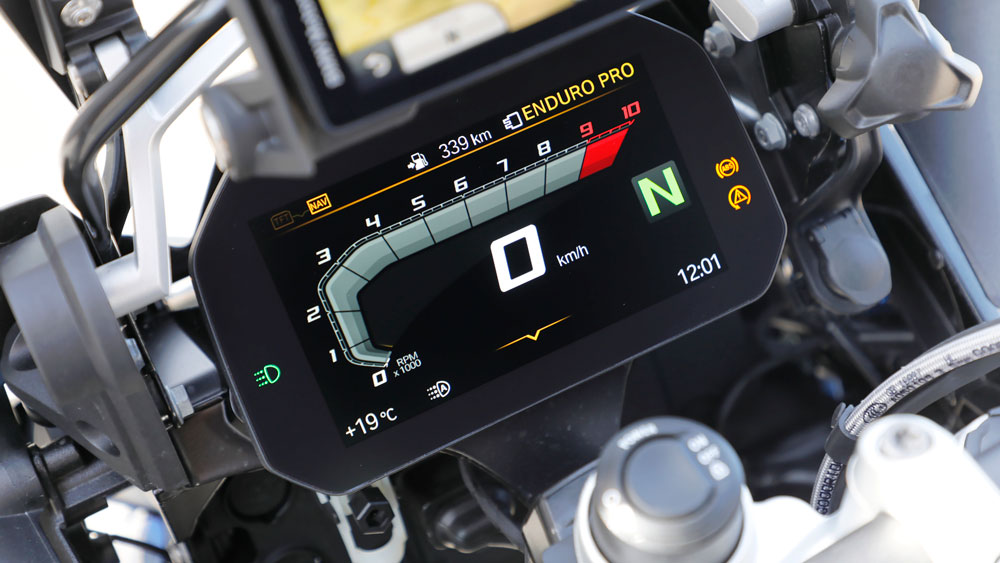 The bike’s 6.5-inch TFT dash is definitely among the top of its class.  Photo: Courtesy of BMW Motorrad.

I’ve ridden every GS of the past 25 years, and there’s a distinct and continuous connection between this one and the 1995 model I first swung a leg over as a teenager. That’s a wonderful trait, and one that will, in my opinion, ensure the GS’s longevity for another 40 years.