These days, having a pair of vintage Levi’s Big E jeans in your arsenal is akin to having a membership to a secret club, an ‘if you know, you know’ establishment with a faded indigo dress code. But why do these jeans, with their covetable red tag with the company name in all caps, have such a holy grail status?

The Levi Strauss & Co. story is a mythic one that begins in 1853 in San Francisco, when the Bavarian-born Levi Strauss emigrated from New York to capitalize on the allure of the Gold Rush, outfitting prospectors with his dry goods business. It wasn’t until 1873, however, that the company cemented its place in the annals of attire. “Levi Strauss & Co.’s blue denim copper-riveted waist overalls, as they were originally called, are the world’s first blue jeans and also known as the Levi’s 501. They were patented on May 20, 1873, nearly 150 years ago,” Tracy Panek, Levi’s in-house historian, informs Robb Report.

Since 2014, Tracy has been managing Levi’s archives, which are stored in a fire-proof safe that’s a Fort Knox of denim at the company’s headquarters on the West Coast. “The oldest pair of blue jeans in our archives is called ‘XX’ and dates to about 1879,” she adds. Jeans like these were made from 9 oz. blue denim sourced from the Amoskeag Mill in Manchester, New Hampshire; today, original XX jeans are a museum-worthy collectible fetching sums comparable to the down payment on a home. 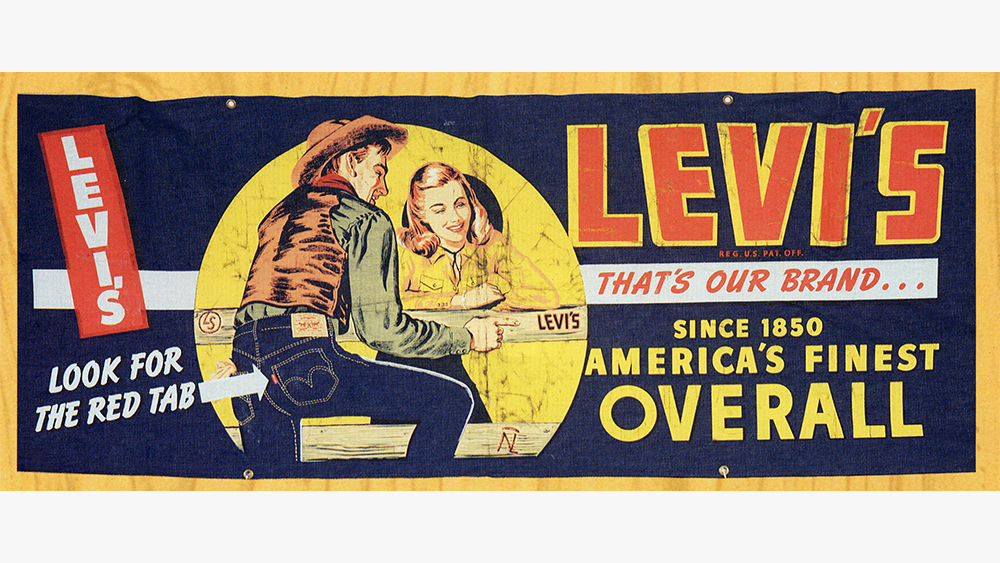 It would be another 60 years until Levi’s embarked on another chapter in its history with the introduction of the famed Big E. “The red tab on the right back pocket of our 501 jeans was first introduced in 1936 using with the word LEVI’S woven in all capital letters,” says Panek. “I get a regular flow of requests about Levi’s vintage garments, with perhaps one-third asking for information about Big E jeans or jackets.” The past two years, she notes, have seen a notable uptick in interest around all things Big E.

Introduced to help differentiate Levi’s denim from the competition, the red tab has become an icon unto itself. Long before Nike’s swoosh or Adidas’ three stripes, Levi’s red tab pioneered the power of branding. It one small but monumental bit of marketing genius that the company would carry on in its TV commercials, from the Laundrette one with Nick Kamen to Flat Eric.

501 jeans with the Big E label were only produced up until 1971, which is why, today, supplies are extremely limited—one of the main factors in their coveted status. “Customers understand that they are really hard to find,” says vintage-specialist Nathaniel Asseraf of Broadway & Sons. “I’ve now stopped listing them online and stock them in the warehouse whenever I find any.” With his younger brother Noam, the Asserafs have taken the reins from their father David, who founded the Gothenburg-based vintage emporium in 1972 and once bought 90,000 pairs of jeans in a single transaction.

In Paris, Gauthier Borsarello—vintage dealer, creative director of Holiday Boileau and editor-in-chief of L’Etiquette magazine—owns more than 30 pairs of Big E jeans. Borsarello agrees that the desire for them is high but it’s currently at such a fever pitch that he’s no longer interested in them. In his opinion, “the only important quality of an old pair of jeans is the unique patina they have. The materials used in the past were not better, they were different. Everything from the quality of indigo and denim, to the water, cotton, looms, copper rivets, etc., they were all different,” he says.

Valid as Borsarello’s point may be, there is an argument to be made for the superior quality of Big E denim. As of 2002, when the last Levi’s factory in the US shuttered, all contemporary Levi’s jeans are made overseas. So, Big E denim is a guarantee of buying a product made in America at the company’s own facilities. Further, up until the mid-1980s, Levi’s used American-milled selvedge denim (selvedge is generally considered to be the highest quality denim)—something that is virtually extinct, since Cone Mills’ North Carolina facility shuttered in 2017. Considering that, Big E jeans are unlike any denim one could buy new today. 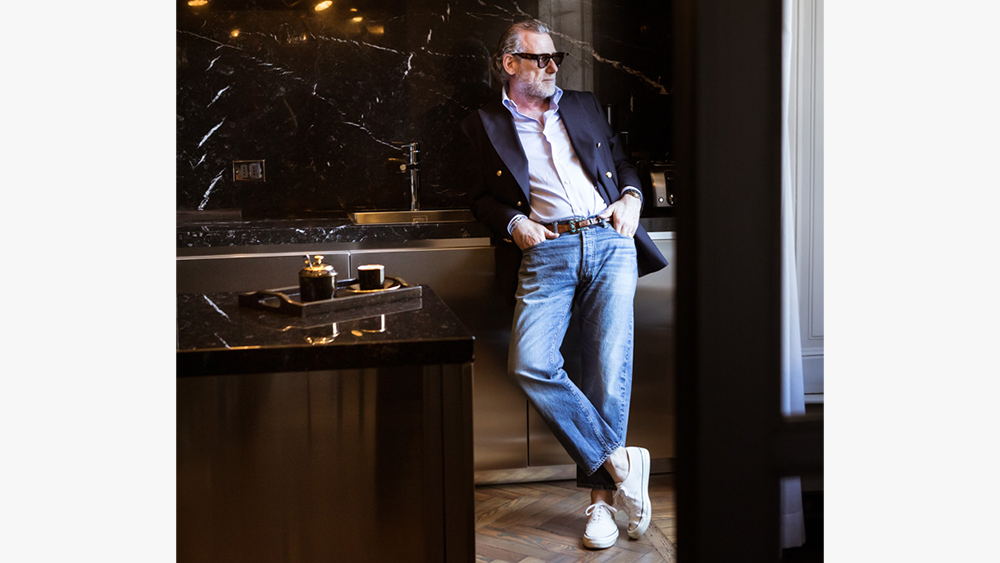 Alessandro Squarzi in a pair from his extensive collection of Big E 501 jeans.  Massi Ninni

While Borsarello’s 30 pairs might sound excessive, it’s a collection that’s dwarfed by Alessandro Squarzi’s 150 pairs. “There is a return to things that have a story to tell,” the Italian fashion entrepreneur says of the fascination behind Big E. “It is clear that the replicas no longer have anything to do with the originals of the past.” One of the most photographed men in fashion, Squarzi regularly posts his outfits to his 223,000 followers. With such a large following, Alessandro is undoubtedly one of the ringleaders of the Big E craze among #menswear devotees.

Patina is the main selling point for Simon Crompton of Permanent Style, who says that the “distinct appeal of vintage jeans for me is the unique character created by the way they’ve been worn, torn and repaired over the years.” It’s not so much about their rarity as it is “the individual look they have. It’s emotional, but also aesthetic,” he adds. 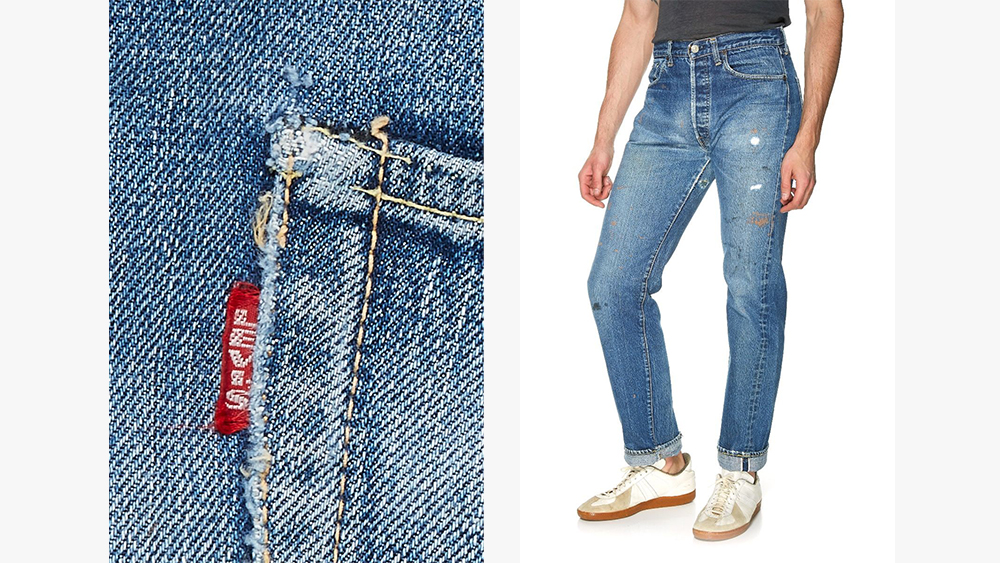 Sourcing Big E jeans, which have a regular rise and a straight leg, isn’t as hard as you might think. It just requires time and patience—it can also be quite lucrative. Scouring eBay and Etsy may produce the best deals, but there are also reputable dealers like Broadway & Sons and What Goes Around Comes Around. “It’s hard to put an average price on a pair of Big E today as it all depends on the year, condition and the seller. If you’re lucky you can find a pair in a second hand shop for €100-200 – I myself found a pair of 60s Big E last year for €105 and flipped them a month later for €750,” Asseraf informs us. Meanwhile, Crompton bought his for almost £300, so it’s a case by case scenario.

Regardless of the price, though, there is inherent value in a pair of Big E. Modern jeans, despite their best efforts to mimic decade’s worth of wear and tear, they never meet the mark. If you want something with authentic character, something that no one else has—which to some is what defines luxury—classic Big E 501s are a worthwhile investment, one that will only get better with age.