On October 14, Bonhams will present a collection of historical artifacts related to President John F. Kennedy, carefully curated by Jim Warlick for his touring exhibition, the American Presidential Experience. Seen by millions of visitors, the exhibit has traveled the country as a non-partisan tribute to presidential history, and includes some fascinating objects.

The auction, held online from Bonhams’ New York salesrooms, will include 70 items, including two Lincoln automobiles used by JFK and a replica of Air Force One.

No US president, in modern times, has captivated a global public more than Kennedy. Postage-stamp designs issued in his honor by nations around the world number into the hundreds, if not thousands, and artifacts from his 46-year life are cherished by the institutions and individuals who collect them. 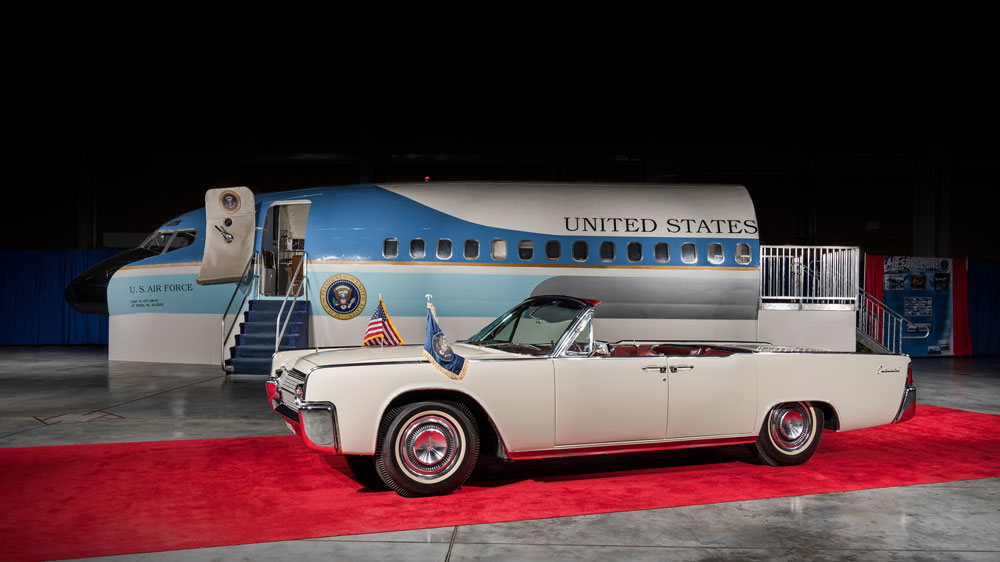 Along with two cars that carried JFK, the auction will also offer a replica of Air Force One.  Photo: Courtesy of Bonhams.

Vehicles associated with the life of JFK attract particular attention. The 1961 Lincoln Continental that carried the President on that fateful morning of November 22,1963 in Dallas is a centerpiece of the Henry Ford Museum in Dearborn, Mich., but few people realize that it was highly modified at the request of JFK’s successor, Lyndon Johnson, following the assassination. Pressed back into presidential service with full armoring, a new interior, a bulletproof hardtop and a color change from dark blue to black, it was—remarkably—used by Presidents Johnson, Nixon, Ford and Carter before being retired in 1977. Some would say the car that JFK was riding in when killed is now the same vehicle in VIN only.

By contrast, the 1963 Lincoln Continental Convertible that carried JFK, Jackie and Governor John Connally to Carswell Air Force Base earlier that deadly morning remains pristine. Used during their visit to Fort Worth and the morning of their departure for Dallas, it retains its original red leather interior, and is the last car to safely transport the President alive. Photos and film reels document its use, showing Jackie in a pink dress and pillbox hat brightly contrasting with the car’s Ermine White paint. Estimated at $300,000 to $500,000, it is a significant piece of presidential history. 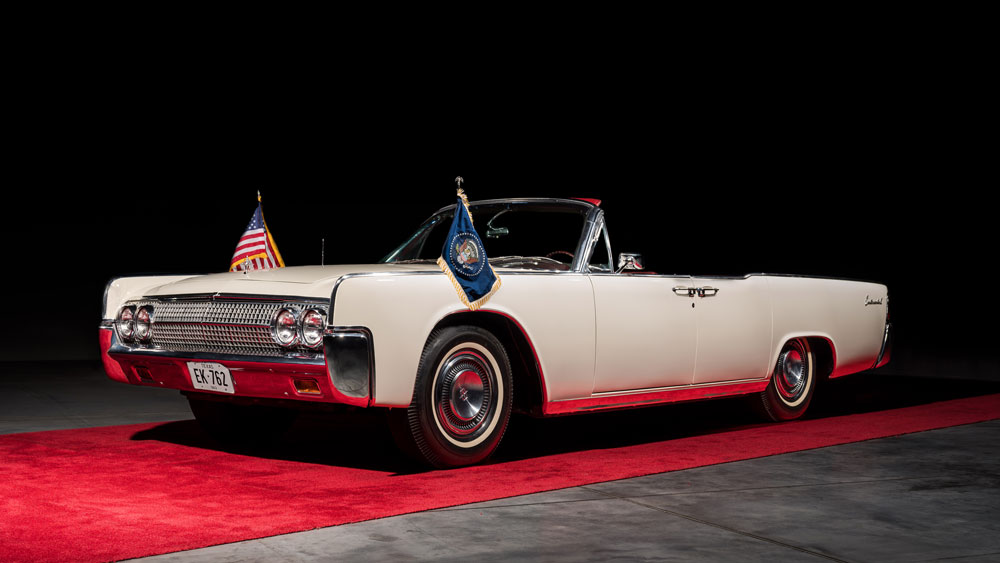 Also on sale is JFK’s “personal” car, estimated at $200,000 to $300,000. Used for the White House motor pool, the black 1960 Lincoln Continental Mark V Executive Limousine is a massive armored thing and, while largely restored, retains its original interior.

The last phone call made by the President was from a pair of cream-colored rotary telephones placed in the Presidential Suite of the Hotel Texas, which had been temporarily decorated with paintings by Picasso, Van Gogh, Monet, and others. The phones bear the White House emblem and are estimated at $20,000 to $30,000 for the pair. The story, told by author William Manchester in Death of a President: November 20-25, 1963, pages 120-121, offers a touching glimpse of the first couple: 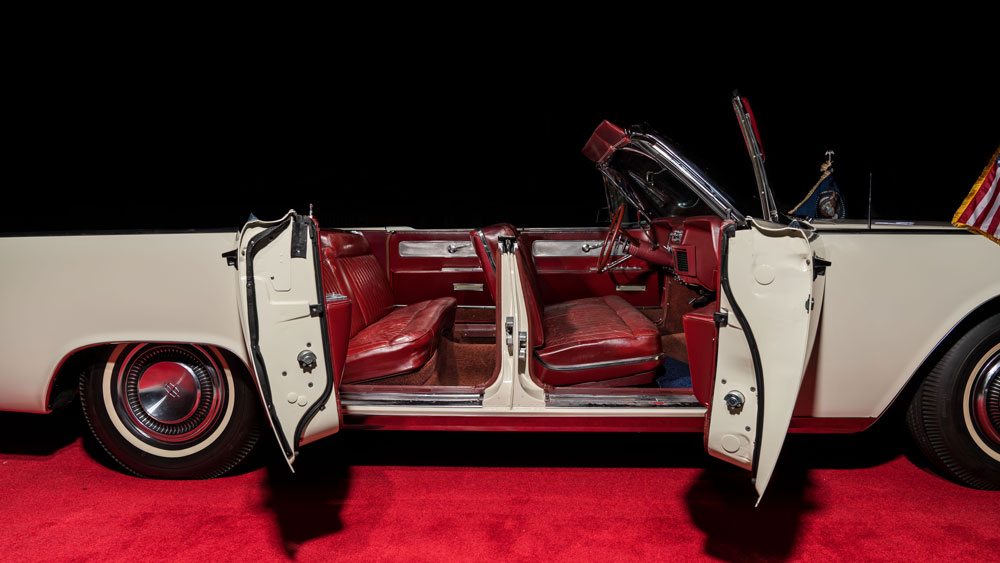 “In the fatigue of last night and the haste of this morning neither Kennedy had noticed that they were surrounded by a priceless art exhibition… A catalog, which had also been overlooked, disclosed that the exhibit was in their honor. ‘Isn’t this sweet, Jack?’ she said…‘They’ve just stripped their whole museum of all their treasures to brighten up this dingy little hotel suite.’ He knew it had been done for her, and taking the catalog he said, ‘Let’s see who did it.’ There were several names at the end. The first was Mrs. J. Lee Johnson III. ‘Why don’t we call her?’ he suggested. Thus Johnson…became the surprised recipient of John Kennedy’s final telephone call.” 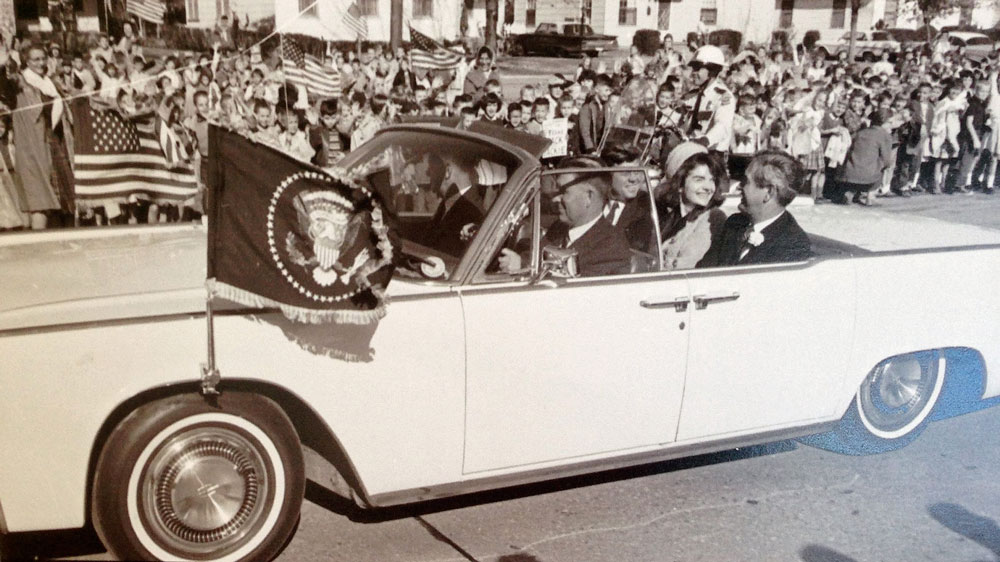 The first couple riding in the 1963 Lincoln Continental Convertible that’s now available through Bonhams.  Photo by Picasa, courtesy of Bonhams.

Proceeds from the Bonhams sale will go toward the Workers’ Legacy Foundation, a non-profit project to honor millworkers in rural North Carolina and offer scholarships to children of millworkers who are the first generation in their families to attend college.